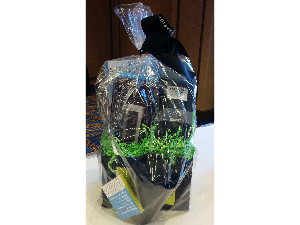 Every Coffee Lovers Dream- Enjoy a Coffee Boost: Grand Rapids knows that meeting planners need a caffeine boost every once in a while. Our basket includes a selection of gourmet coffee beans from Mad Cap Coffee, a coffee bean grinder, and accoutrements needed for the perfect pick me up!