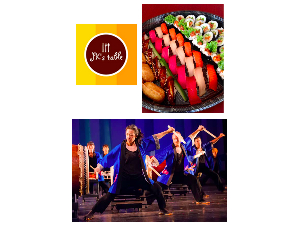 Due to high demand, we are bringing back the new and improved Taiko Dinner for 8! On a Sunday night, we will cater a delicious Japanese dinner in your home for you and your friends. The dinner will be served and prepared by JK's Table, a new restaurant venture of Chef Kuma (lead chef from Obento-Ya and Origami) and his wife, Junko, who is a current Mu Taiko Institute member. Mu Daiko Artistic Director Jennifer Weir will help you host, and will give your guests an insider presentation on the art form of taiko drumming, as well as a small performance. The dinner will include Japanese appetizers, salad, sushi, yakisoba and dessert, and, of course, sake.