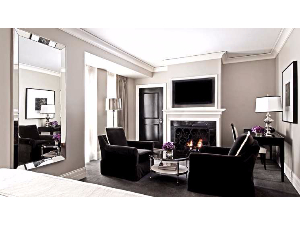 A Night at the Waldorf Astoria. The Waldorf Astoria is a AAA-rated Five Diamond Hotel - the highest rating of quality and luxury. Fewer than one half of one percent of all hotels achieve this status. The Waldorf Astoria Chicago is detailed to emulate the timeless glamour found in the grand hotels of Paris in the Twenties.Guest rooms are expansive, averaging 890 square feet, and feature fireplaces, furnished outdoor terraces, private bar, operable windows and multiple closet, White Carrera marble bathrooms with soaking tubs, separate showers and dual vanities, feather beds, lavish bath amenities and plush terry bathrobes. Complimentary access to the Waldorf Astoria Spa & Health Club, featuring a mosaic-tiled lap pool, whirlpools, saunas, steam rooms and fitness equipment. Includes brunch for 2 at Balsan, a sophisticated European bistro with a menu featuring classic dishes and interpretative American favorites built around fresh, local ingredients. Stake your claim to luxury