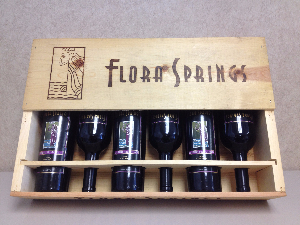 Hillside Reserve! Enjoy six crated bottles of 2000 Flora Springs "Hillside Reserve" Rutherford Cabernet Sauvignon! According to Robert Parker's Wine Advocate,
The 2000 Cabernet Sauvignon Hillside Reserve is a 100% Cabernet Sauvignon, limited production cuvee (about 800 cases) fashioned from the estate's top vineyards. This excellent effort boasts a dense plum/ruby color as well as a tight but promising nose of cassis, earth, and cedar. Medium-bodied, tightly structured, and rich, with a delicious attack followed by a narrow finish with moderate tannin.
A special thank you to Dr. Raymond and Mrs. Debbie Rybicki for their generous donation!