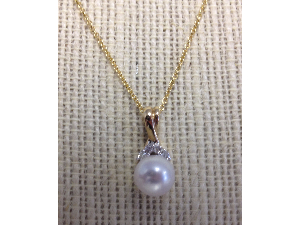 Gold, Pearl & Diamond. Take home this beautiful gold, pearl and diamond pendent hand selected for the Kentucky Derby Gala by Rasmussen Diamonds. A special thank you to Rasmussen Diamonds for their generous donation.