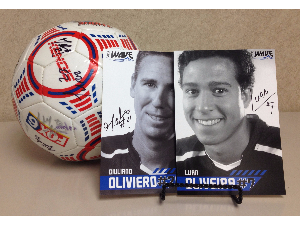 Futbol or Soccer !?! Whether you call it Futbol or Soccer, you will agree this fun Milwaukee Wave package is exciting! With (4) Preferred Tickets to any 2015-2016 Regular Season Milwaukee Wave Game, Full team signed soccer ball, and autograph photos - this is a can't miss package for any fan! A special thank you to MKE Sports & Entertainment for their generous donation!