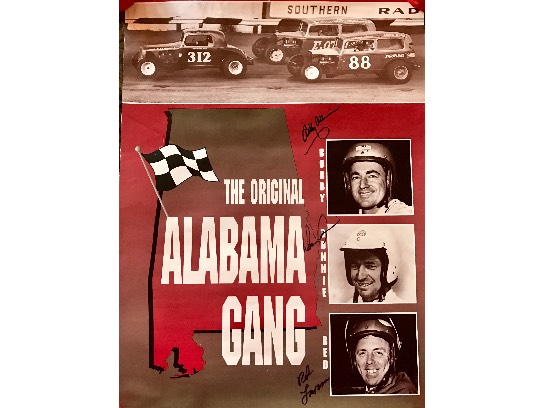 Autographed Poster of the famed Alabama Gang including

The Alabama Gang was the nickname for a group of NASCAR drivers (and subsequently their offspring) who set up shop and operated out of Hueytown, Alabama (near Birmingham, Alabama). In the late 1950s, young auto racer Bobby Allison left Miami, Florida, looking for an area that had more opportunities to race. He discovered central Alabama in his travels. The region was dotted with small dirt tracks, and Allison won big his first few times out. He returned to Florida to pick up his brother Donnie Allison, and friend Red Farmer.

The trio set up shop in Hueytown, Alabama, and were dominant throughout the 1960s and early 1970s. In 1973, Jimmy Means joined the gang. Beginning in 1979, their sons and contemporaries began racing, and became known as members of the Alabama Gang themselves. Bobby's son Davey Allison, and fellow Hueytown residents Neil Bonnett, and David Bonnett. Hut Stricklin, who married Donnie's daughter, became the last member of the Alabama Gang.

Other drivers (notably Dale Earnhardt) were great friends with members of this group, and while not Alabama residents, these other drivers became associated with the Alabama Gang.

All of the original members of the Alabama Gang have been inducted into the International Motorsports Hall of Fame.

This item is not framed