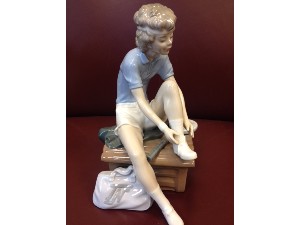 The winning bidder will become the proud owner of an exclusive Lladro figurine. This precious figurine with a player getting ready to hit the tennis court is a collector's piece with a limited edition number printed on the bottom. The Lladro porcelain company was founded on the outskirts of Valencia, Spain, in 1955.