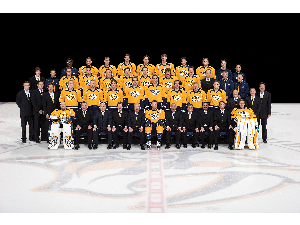 Are you a huge Preds fan who has everything already? If so, this item is for you! Pose with the 2014-15 Nashville Predators team on a-to-be determined date for their annual team photograph. The winning bidder will receive a framed copy of their team picture. Scheduled the morning of March 23rd (subject to change).