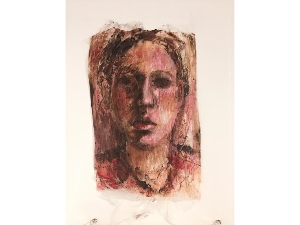 "Self Portrait On Gauze" by Christina Van Der Merwe