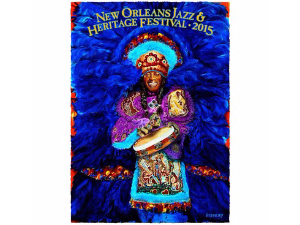 We've been asked over the decades to portray one of the Mardi Gras Indian Big Chiefs on a poster. We shied from it, with the exception of the 2006 Congo Square poster portrait of Big Chief Monk Boudreaux by Richard Thomas. That piece was more about Thomas' style than the incredible walking art form invented by these (mostly) men. Frankly, we were cowed by the idea of attempting to craft a literal vision of an original visual art form, one as uniquely American as jazz itself. Then we contemplated the inspirational life of Bo Dollis, Chief of the Wild Magnolias and we resolved to overcome the apparent obstacles.

We started work on our portrait of Theodore Emile "Bo" Dollis in August. He was not well, but we hoped he'd be here to bask in the event. Today, January 20th, 2015, the piece that Randy (Frenchy) Frechette finished more than a month ago became a memorial to this 71-year young great of the "new" generation of Indian Chiefs. These men eschewed the violence of the old Indian gangs, embracing instead competitive costuming & chanting. They rejected a culture of pain and advanced an enduring art that burst out beyond the confines of Central City New Orleans with the 45rpm single "Handa Wanda" in 1970, the same year he appeared at the 1st New Orleans Jazz Festival. In 1974 he released the pioneering album, "The Wild Magnolias," fronting an all-star lineup put together with the help of Festival Producer Quint Davis that included Bo's wife, Laurita.

Bo brought the gift of New Orleans' unique culture to fans globally. For his innovations he was awarded a National Endowment for the Arts' National Heritage Fellowship in 2011. As his health failed, his son, Bo Dollis, Jr. took over the live tours. The legacy lives on even as the man himself has ascended to legend.

Randy (Frenchy) Frechette may seem an unlikely choice to wrestle a legend onto the silk-screened page. But this son of a pro boxer punches way above his weight class. Frechette moved to New Orleans in 1997 to paint the local music scene. Shortly thereafter he fell in thrall of the Indians. He met Bo at Second and Dryades on his inaugural Mardi Gras in New Orleans and knew he was home.

Frechette rose to fame painting live; turning solitary painting into public performance well before performance art was embraced. His rapid-fire staccato makes Polaroids seem slow to develop. Whether seen live at music clubs and stadium concerts or on ESPN, Monday Night Football or Bloomberg Television, his raw energy is captivating and transfixing, sometimes beyond the event itself.

In Frechette, art4now saw the same restless creative spirit that pushed Bo to sneak out, costume and parade against his parents' better judgment way back when. Such forces of nature cannot be contained. They power greatness. We wondered what Frechette would do if given 100 days - instead of 100 minutes - to paint with no audience except art4now's creative director. We'll let the art speak for itself.

The hue, color depth and saturation of the feathering depicted in the poster is a singularly powerful visual experience that could only be rendered in silk-screen. It's magic: Inspired by the soul of the greatness Bo Dollis embodied and the photographs of Michael P. Smith housed at The Historic New Orleans Collection.