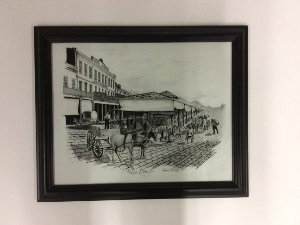 Framed black and white giclee of The French Market by Robert Egan Sr.