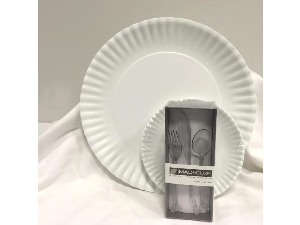 Michael Arm Designs Twig Cutlery 12 count, 16" "Paper White" platter, 4 Dixie Paper Plate/Melamine: It's Not Paper! The product has the modern styling and appearance of a disposable Dixie plate, it is actually sturdy and long lasting. It is fold proof and sturdy enough for the heaviest meals and dainty enough for the lightest desserts