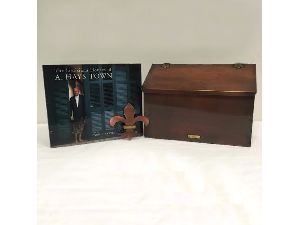 Bevolo Gas & Electric Lights 14"x10"x6" handmade copper mailbox is sure to add some sophisticated charm to your home or business. Also enjoy a Belvolo Collection Fluer De Lis ornament and "The Homes of A. hays Town"