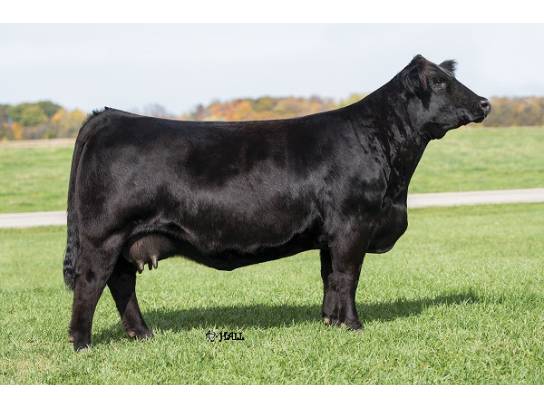 Selling one confirmed, heifer pregnancy by VCL Foresight
Due to calve March 14, 2023

A big-opportunity pregnancy from the amazing Serena 74Y! This guaranteed heifer calf pregnancy will yield a full sister to the world record setting STCC Tecumseh that brought $620,000 for one-half interest last spring in the Hartman Sale to Frekking Cattle, MN. Serena 74Y is coming off her best year yet with - among other accomplishments - the hottest quartet of show heifers on the tanbark. The oldest, is the reigning ASA Percentage Show Heifer of the Year after a season filled with banners for Mercedes Ferree, IN. The middle daughters were recently Supreme Champion of the 2022 Nebraska 4-H Fair for Jami Hoblyn, NE, after she showed her to Reserve Supreme honors earlier this year at the NE Cattlemen's Classic while her flush sister was Reserve Champion Percentage Female of the 2022 Nebraska State FFA Show for the Peterson family who also won their class with her at the 2022 National Classic. The youngest sister was a class winner of the National Classic and Champion Percentage Female of the 2022 Utah State Fair for Bella Beins who also showed another Serena 74Y daughter by Follow Me that was 5th Overall Percentage Heifer of the 2022 National Classic. Serena 74Y is coming off her best year yet with an amazing array of winners and high sellers. She is not getting younger but she is getting better!