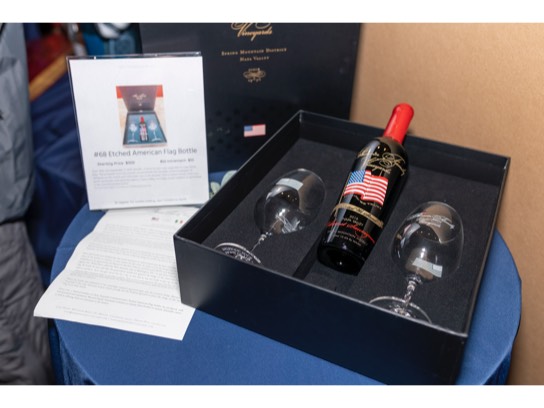 Soon after the September 11, 2001 disaster, a Wine Auction was organized in Lake Garda Italy. The proceeds from this auction would benefit the famalies of the employees of Windows on the World who have been lost in the disaster. One hundred vintners from two world-renowned wine-growing regions, Napa Valley, and Italy, joined together to participate in the commemorative event.

When Steve and Linda Sherwin were asked to participate, they immediately agreed and decided that they would like to create a specially designed bottle for the occasion. Steve submitted the design idea to the etcher, and the result was a striking hand-etched and painted bottle featuring the American Flag with the meaningful words "In God We Trust" and "United We Stand". The back of the bottle also stated that it was proudly created "in remembrance of those lost September 11, 2001.

The Sherwin Family Vineyards is the only American winery that has the Federal approval to place the image of the American Flag on its wine bottle.

Every year, a limited number of these Commemorative Etched American Flag bottles are produced, each hand-painted and numbered. Sherwin Family Vineyards continues to donate thee bottles to various charitable causes, as well as offering them to customers at the winery.