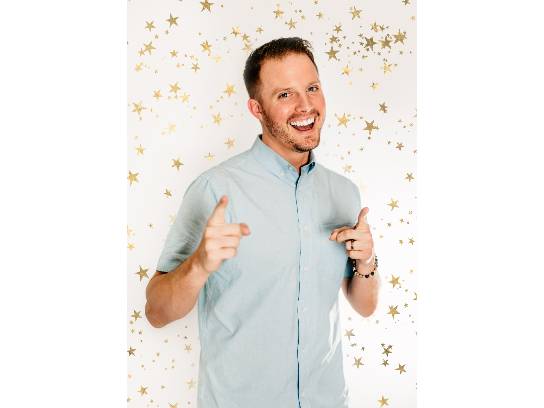 Let's give a big District 41 salute for one of Glen Ellyn's favorite educators...Brian Schremp!!! He is known by the kids as one of the coolest teachers in town (the parents think so too)!!! A western suburban native, Brian hails from Villa Park, but knew from a young age to venture further west to Glen Ellyn to celebrate his dad's birthday yearly at Barones!
After getting a taste of Glen Ellyn, Brian was hooked! He has been working at District 41 for 12 years -- 10 as a teacher at Ben Franklin and going into his second year as Assistant Principal at Lincoln. Not only did Brian spread knowledge during his time at Ben Franklin, he also spread the love by meeting and marrying his wife, Ana, also a teacher at Ben Franklin. They've expanded the District 41 family with their son, Bodie, who just celebrated his first birthday.
Recovering from the sleepless nights, Brian is excited to show off his dance moves, including his favorite - the slide across the floor on his knees. Although this dance move typically requires a wet dance floor and liquid courage, Brian now has a professional dance partner to help his competitive nature bring him a win in support of Glen Ellyn Infant Welfare. As an educator, Brian has first hand knowledge of how powerful and life changing non-profit organizations, like GEIW, can be to support our community's children and families, including the gas cards, access to car seats, and other basic necessities. We are expecting a round of applause way longer than the 10 second head stand he is known for by first graders!
Another Fun Fact: Growing up, Brian's sisters were involved in dance and the theatre which led Brian to viewing the Nutcracker over 500 times! Coincidentally, Brian and his family have visited Target in what feels like over 500 times in the past year. We know you will love Brian's dance moves as much as he loves Target!