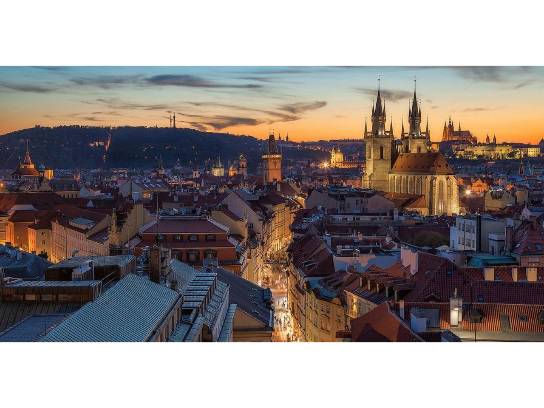 Lying in the heart of Europe, Prague is one of the continent's finest cities and the major Czech economic and cultural center. With its magical and mystical atmosphere, a visit of the "city of a hundred spires" is like finding yourself in a fairy tale, with its cobblestone streets, beautiful medieval bridges and numerous towers and cathedrals.

The city has a rich architectural heritage with a history that is over 1000 years old. Among the most important monuments are the Charles Bridge, which stands astride the Vltava River and is considered the most beautiful bridge in Europe, as well as the great castle of Hradcany, dominating the left bank region of the city, looming up from behind massive walls, perched high upon a hill. The old neighbourhoods are captivating, full of narrow streets and small taverns that contrast with the broad sweep of Wenceslas Square and the elegance and majesty of the great 18th century Baroque palaces. In 1992 the entire historic center was added as a Unesco World Heritage site and recognized as one of the world's most beautiful and romantic cities.

NOT INCLUDED: Airfare, ground transportation. Must be used within 24 months.