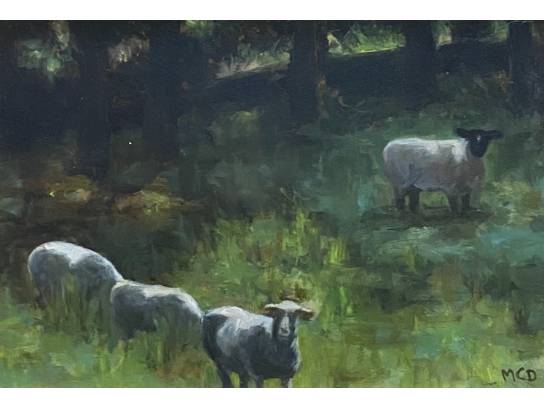 Lamb Shade by Moira Daniells oil on copper, 5 x 7 inches, 8.75 x 10.75 inches framed. Moira Cowell Daniells grew up in the Connecticut River Valley and her interest in art began as a child, when she received traditional academic training in drawing and painting for a number of years. She graduated from Green Mountain College and began to pursue a career in the financial world until later attending and graduating from the Lyme Academy of Fine Arts. Moira has exhibited her work at the Academy as well as a number of galleries. She is a member of the Connecticut Women Artists, the Lyme Art Association, the Essex Art Association, and the Salmagundi Club in New York City. She has won several awards, including the President's Award for Citizenship and Excellence in painting at the Lyme Academy. Her paintings are in private and corporate collections in New England, Maryland, and Washington D.C., as well as the West coast.