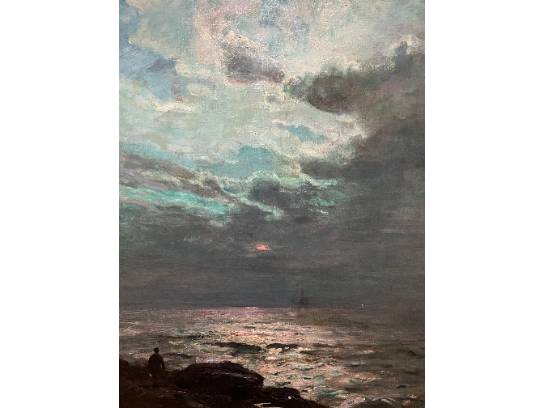 Night Watch by Howard Russell Butler (1856-1934) oil on canvas, 29.5 x 24.25 inches, 36 x 30.75 inches framed. Howard Russell Butler was born in NYC and began to study art at the early age of fourteen in Yonkers, NY. In 1876, he graduated from Princeton University with a degree in Science and in 1881 with a law degree from Columbia University. In 1884, Butler decided to concentrate entirely on painting and studied with J. Carroll Beckwith and George de Forest Brush at the Art Students League in New York before traveling to Paris where he was a member of the artistic American colony. In 1889, he raised the capital to build the Fine Arts building at 215 West 57th Street in NYC which became the home of the Art Students League, the Society of American Artists, the Architectural League of New York, and the newly formed American Fine Arts Society which he led for seventeen years. Butler is known particularly for painting seascapes and solar eclipses. His works can be seen at the Metropolitan Museum of Art, the Smithsonian Art Museum, American Museum of Natural History and many other private and public collections throughout the United States and abroad.