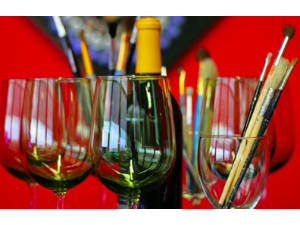 Drink and Paint. Feeling creative? Like wine? Then Arte is for you! Get step-by-step guided instructions from one of our fun artists. A 16" X 20" canvas and all painting supplies are included. Register for the date and painting of your choice. Two hour class for 2; create your masterpiece to take with you and receive a painting by one of our artists. Donated By: Arte & Wine Bar Value: $100