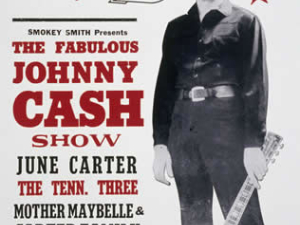 When the fabulous Johnny Cash Show rolled into Minneapolis on April 22, 1967, Hatch Show Print heralded the arrival of the Man in Black with this historic poster. Cash's star-studded supporting cast for the show included Mother Maybelle and the Carter Family, the Statler Brothers, and Carl Perkins. Relive the glory days of the one and only Johnny Cash with this distinctive 14 x 22" poster.
Donated By: Hatch Show Print Value $100