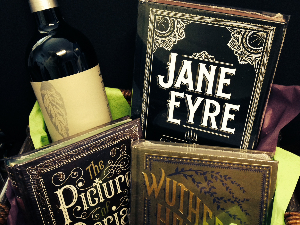 Bored on a rainy day? Not anymore! This basket offers classic editions of Jane Eyre, Wuthering Heights, and The Picture of Dorian Gray. Curl up with a classic and sip a delicious mouthful of Laya, a red wine with a sensation that lingers on the very long and smooth finish. Enjoy!
Donated By: Taren Sartler Value: $65