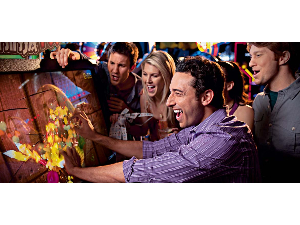 Let your inner kid run free. It's all about food and fun at Dave & Buster's. Where else can you find a restaurant serving everything from wings to New York strips, a bar with the best happy hour in town, and the latest interactive and video games? Our Million Dollar Midway offers 200+ games to play. Donated By: Dave & Buster's Value: $50