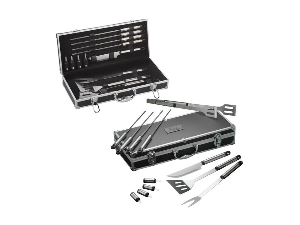 Grill Like a Pro - Be the master griller at your next party with this 13-piece BBQ set, which includes everything needed to be king or queen of the backyard grill - spatula, tongs, knife, fork, four skewers, and four corn holders, all in an aluminum case. Not juicy enough? Well, here's the meat - 2 delectable bacon wrapped-tenderloins, 6 brats, 6 italians, and a $10 gift certificate from Bunzel's Meat Market.
Donated By: Modern Woodmen and Bunzel's Meat Market Value: $125