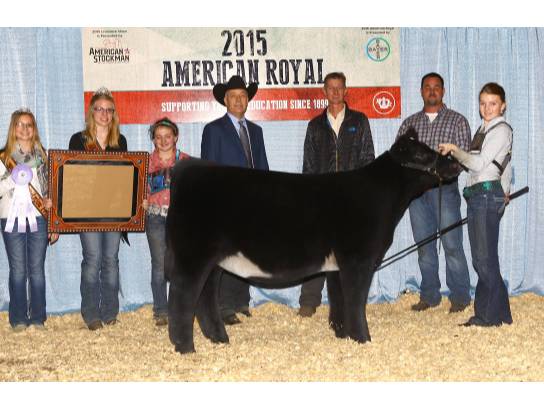 HEIFER EMBRYOS. From the "Winnie" foundation in the Goettemoeller Show Cattle herd, these are some very proven Maine-Angus packages from the top!
This $53,000 purebred was bred at Goettemoeller Show Cattle, IN, and selected as the Calf Champion Female of both the junior and open shows at both the American Royal and the North American International. She is a full sister to the Chamberlin family's Win Dixie 8B that as the most decorated Maine-Anjou show heifer of her season when she won the both calf divisions at the American Royal and the NAILE and went on to be Grand Champion of the 2015 American Royal Open Show and Reserve Champion of the Junior Show before she was Grand Champion of the NAILE Junior Maine-Anjou Show and Reserve Champion of the Open Show.
Both are full sisters to the $30,000 Frozen Gold high seller, X-Rated, from an incredible Goettemoeller dam that produced a pair of steers shown by the Boersen and Vickland families that were winners from Michigan to Colorado and in between.
The donor here is also a maternal sister to the Bismarck daughter bred by Goettemoeller and shown by the Chamberlin family to wins like Supreme at the Hoosier Congress and Kentucky Expo plus Champion MaineTainer of the 2017 Indiana State Fair and both the junior and open shows of the American Royal to name a few.
More siblings include the high-selling female of the 2017 OMAA Sale, the top bred heifer of the 2017 Winners Circle Sale, a heifer that won for Macie McCollum, TX, and sons up to $53,000.