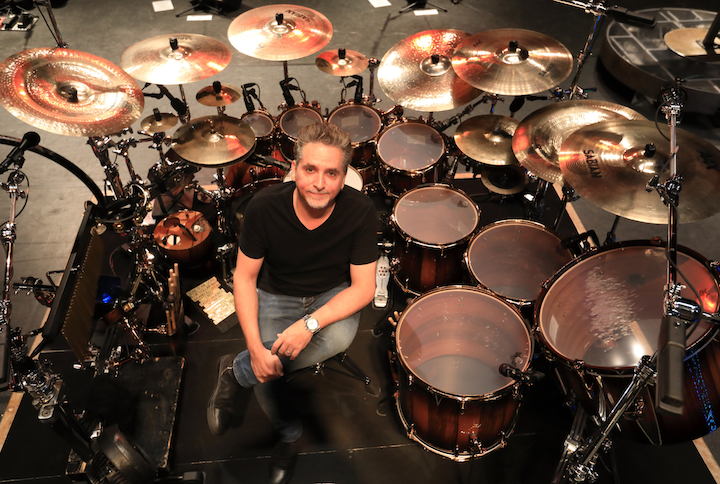 Todd Sucherman continues to be one of the world's most in demand drummers and educators. While recording and touring the world with the multi-platinum rock band STYX for the last twenty four years, he's managed to balance a schedule of recording sessions, masterclasses, clinics, and creating the enormously successful "Rock Drumming Masterclass" for Drumeo. Todd has been recognized by his peers winning many Modern Drummer Magazine Reader's Poll awards through the years taking top honors in the categories of Rock Drummer, Progressive Rock Drummer, Classic Rock Drummer, Live Drummer, Clinician, Educational DVD, Recorded performance, and multiple placements in other categories. In 2020 after playing drums for forty-nine years, he released his first solo record, "Last Flight Home."

Todd Sucherman grew up in a musical family. His father, Arnold J. Sucherman was a doctor by day, and a big band drummer by night. He was the house drummer at the famed Chez Parre' in Chicago through the 1940s and 50's.

Todd was fascinated with the drums as an infant. His father taught him to play and could read music by age five. His first paying gig was with his brothers, "The Sucherman Brothers" at age six. Todd kept up with his musical studies through school and attended Berklee College of Music for one year.

In 1988, Todd returned to Chicago and quickly established himself as a first call musician in the recording scene. As an in-demand player for live and session work, this led to his association with the band STYX. Todd was called in to record when Styx's John Panozzo was ill. After John Panozzo's untimely death, Todd's position in the band was solidified. Twenty-four years later Styx continues to play to millions of fans all over the world averaging 100 dates a year. Todd has recorded several albums with the band including "Big Bang Theory" which put the band in the top 50 on Billboard for the fourth straight decade and "The Misson" which garnered him a Modern Drummer Reader's Poll award for "Best Recorded Performance. In-between his time with Styx he's recorded over 1000 radio and TV spots and worked with artists diverse as Peter Cetera, Brian Culbertson, Spinal Tap, Michael Bolton, The Falling Wallendas, Eric Marienthal, Taylor Mills, Antoine Fafard, Tzan Niko and Brian Wilson (including his 2003 release with Paul McCartney, Eric Clapton and Elton John).

More accolades came with the release of the "Methods & Mechanics" DVD series (I & II) both winning multiple awards in drumming education in 2008 and 2011. In 2019, Drumeo launched "Rock Drumming Masterclass" that was wildly successful in the field of online education reaching drummers from over 60 different countries.

2020 saw Todd step out front for the first time as a singer/ songwriter with the release of "Last Flight Home" -marking new musical territory and a different landscape to explore. "Music, melodies, and the story of the lyric is what was always most important to me. I think that's why I went in the direction I did with Last Flight Home." Todd explains. "Having just played the challenging instrumental music of Antoine Fafard on his Borrowmean Odyssey record, I feel that scratch had been itched. So by doing this record, I wanted to see if I could pull off something I wasn't sure that I could pull off. I found that to be frightening, challenging, and I thought that's exactly where I should be."

Equally comfortable on the stage with STYX, playing instrumental music with Tzan Niko or Antoine Fafard, prog rock with Finally George or The Legacy Pilots, Gershwin standards with Brian Wilson, risking his life with Spinal Tap, or taking a step out front- Todd has taken his place in the Pantheon of the elite drummers/musicians in the world.