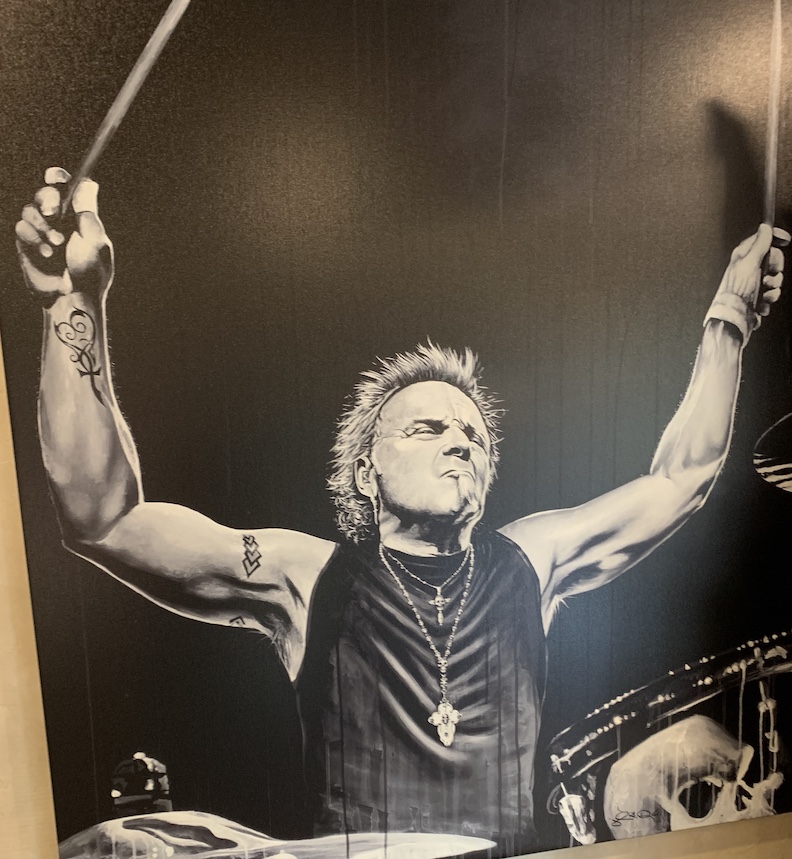 For more than 50 years Joey Kramer has combined emotional feel with technical virtuosity to convey the musical ideas of his band mates in Aerosmith while evolving into one of rock's greatest drummers. His meticulous timing and solid grooves have contributed as much to the sound of Aerosmith albums such as "Toys In The Attic," "Rocks," "Permanent Vacation," "Pump," and "Just Push Play" as Steven Tyler's voice and Joe Perry's guitar.

Joseph Michael Kramer was born in the Bronx, NY on June 21,1950. By the age of 14 he was cutting his musical teeth as part of a Ventures-type instrumentals band named The Medallions. However, it wasn't until Joey started drumming with an 11-piece rhythm and blues outfit during his late teens that he discovered the music that would serve as his main source of inspiration.

In 1970 he reconnected with a friend, Steven Tyler, who had joined forces with Joe Perry and Tom Hamilton and were in need of a drummer. Kramer jumped in and Aerosmith took off. Brad Whitford joined the group in 1971.

For two years the group played throughout New England and got their break on August 5, 1972 at Max's Kansas City Club in New York City. That night the famed record executive Clive Davis was in attendance and was so impressed with Aerosmith that he signed them to Columbia Records on the spot.

In 1973 the band released their self-titled debut album, "Aerosmith," and took to the road. They toured relentlessly over the next two years, taking time off only to record their follow up album, "Get Your Wings" which went Gold.

"Toys In the Attic" was released in 1975 followed by the 1976 release of "Rocks" and the band turned a significant creative and commercial corner in this era as the hits came fast and furious with the likes of "Last Child," "Sweet Emotion," "Back in the Saddle" and "Walk This Way."

Their endless road work paid off in Platinum and exploded into sold out pandemonium culminating before massive crowds of over 80,000 at the legendary Texxas Jam, and to a sea of over 350,000 at the famous CAL Jam in 1978. Aerosmith's status as one of the most popular live acts of the decade was achieved.

It wasn't long though before the intoxicating pace of rock stardom took its toll. The fire that had fueled them now began to burn them from within. As the decade drew to close, half-hearted albums -- 1977's "Draw the Line" and 1979's "Night In the Ruts," -- canceled performances and internal strife dogged the band, weakening them at their core. After a dressing room blowout in July 1979, Perry announced his departure from the group to form The Joe Perry Project. Brad Whitford followed suit shortly thereafter to form Whitford-St. Holmes. The remaining three members soldiered on to eek out 1982's "Rock In a Hard Place," but the magic was gone. By the early 1980s, Aerosmith was all but over.

Cooler heads finally prevailed and in 1984, Perry and Whitford rejoined the group and Aerosmith hit the road for the Back in the Saddle Tour.

In 1985 the group signed a new record deal with Geffen Records and released "Done With Mirrors." That was followed by "Permanent Vacation," which hit record stores in 1987. This was the first in a string of releases that brought Aerosmith more fame, success and accolades than ever before. Their videos tormented the senses and raised the bar for music video excellence with "Dude Looks Like a Lady," "Angel" and "Rag Doll."

The band succeeded "Permanent Vacation" with 1989's "Pump," which spawned hits; "Love in an Elevator," "Janie's Got a Gun," "The Other Side" and "What it Takes."

The groups' strong showing continued into the 1990s when it released "Get a Grip" in 1993 that featured radio slam dunks "Livin' on the Edge," "Cryin," "Eat the Rich," "Crazy" and "Amazing." "Nine Lives" was released in 1997, debuting at No. 1 on the Billboard charts and boasted the hit singles, "Pink" and "Falling in Love is Hard on the Knees." They closed out the decade with their first No. 1 hit single "I Don't Want to Miss a Thing" from the 1998 movie "Armageddon" soundtrack.

After the band released "Just Push Play," Joey went back into the studio with producer Marti Frederiksen to work on a different type of solo project. "Drum Loops and Samples" entailed laying down a comprehensive array of drum tracks for artists of all skill levels to be able to utilize. The two-disc piece has over 340 loops and samples with a range of beats per minute from 71 to 148.

Kramer and Aerosmith have enjoyed tremendous success through their career. The group has sold over 150 million albums and have had concert dates sold out, not only North America, but in Japan, Australia, South America and Israel. They were inducted into the Rock and Roll Hall of Fame in 2001. The group has received two People's Choice Awards, six Billboard Music Awards, eight American Music Awards, 23 Boston Music Awards, 12 MTV Video Awards, four Grammys, and an Academy Award nomination for Best Song, "I Don't Want to Miss a Thing." They were selected as one of the Best Rock Bands by Rolling Stone and Hit Parade magazines and were chosen as the first rock band to be honored as MTV Icons.