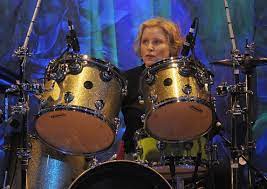 Schock's career began as drummer for Edie and the Eggs, a band assembled to feature the John Waters star Edith Massey. After her stint in Edie and the Eggs, Schock relocated to Los Angeles, California, and soon joined The Go-Go's. Schock recorded and toured steadily with The Go-Go's until the group disbanded in 1985 and reformed a few years later.

Following the dissolution of The Go-Go's, Schock continued drumming with various artists, and would also hone her singing and songwriting skills. In 1987 she joined with Vance DeGeneres and formed House of Schock, which released one album for Capitol Records.

The Go-Go's re-formed in 1990; Schock has toured and recorded with them since. She also works as a writer and producer for new bands. Her drumming continues to gather critical acclaim.

Schock's songs have appeared in films including The Accused, Superstar, and Bull Durham. She has acted for television and in several films, including those of underground director Relah Eckstein.

Gina has co-written with Alanis Morrissette, Carnie Wilson and Wendy Wilson of the pop trio, Wilson Phillips, and Debbie Peterson of The Bangles.

Schock is one of the co-writers of the title track for the Miley Cyrus album, Breakout. She also co-wrote "Falling Down", "Kiss and Tell", "Stop and Erase", and "Crush" for Selena Gomez & the Scene's debut album Kiss & Tell.

And in 2021, the Go-Go's were initiated in the Rock and Roll Hall of Fame, introduced by Drew Barrymore.