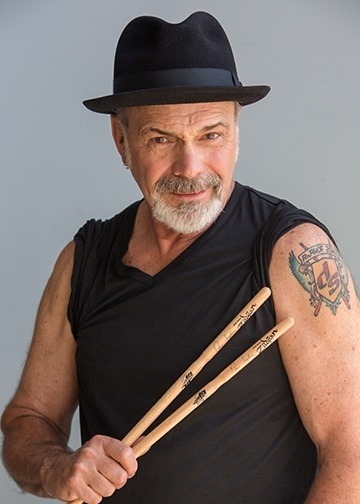 The iconic group that captured the hearts of millions of fans has earned 23 gold, 18 platinum, and 8 multi-platinum albums to date. They have had five number-one albums and 21 top-ten singles. On April 8, 2016 they were inducted into the Rock and Roll Hall of Fame at Barclay's Center in New York.

From the beginning, Danny Seraphine, as the drummer, was always the backbone of the operation. It was his job to keep everyone in time and on balance. He set the pace and carried it through to the end, no matter what. In 1990, after 23 years performing, composing and recording albums with Chicago, Seraphine experienced a jarring parting of ways with the band mates that he considered brothers. The rift threw his life into chaos. Together they had toured the world and created one of the most enduring American songbooks of all time. He left music behind for 15 years, focusing his creative energy on producing, as well as working with a variety of Broadway musical and theatrical projects. After grueling decades spent on the road, Seraphine settled in Colorado, and seized the opportunity to devote more time to his family, deepening his bonds with all six of his children.

In the end, it was a request to play a benefit show for a fellow drummer that pulled Seraphine out of seclusion and sparked a musical rebirth. That night, basking in the glow of a standing ovation, Seraphine realized how much he missed performing.

In 2007, spiritually and creatively reinvigorated, Seraphine returned to the stage with his new jazz-rock powerhouse group, California Transit Authority (CTA) often described as "Chicago on steroids"-and he made peace with his past with the refreshingly candid memoir Street Player: My Chicago Story (Wiley).

Critically acclaimed as an instrumentalist and a composer, Rolling Stone magazine has ranked "the father of jazz rock" as one of the top 100 drummers of all time.