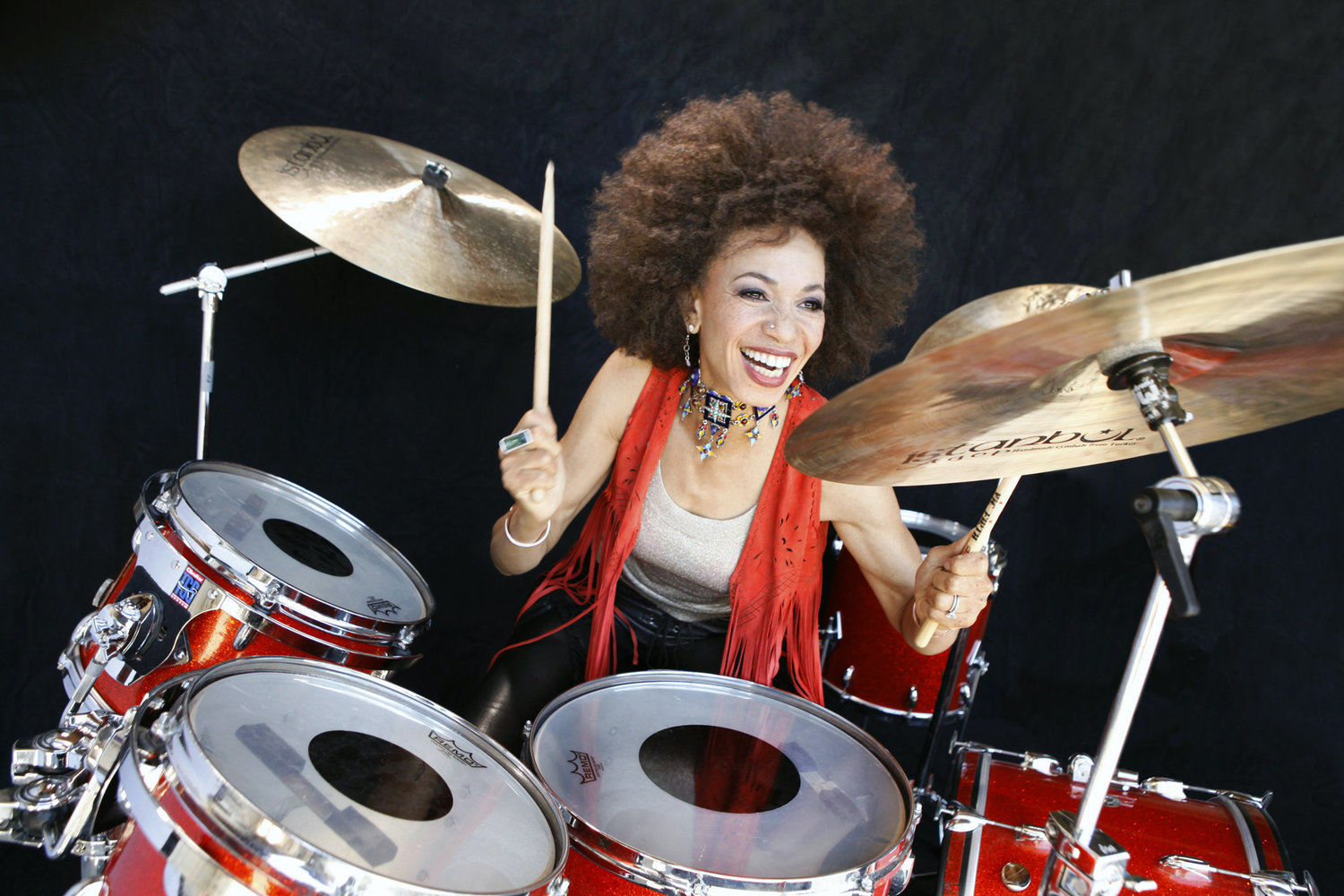 Cindy Blackman Santana is a virtuoso drummer whose artistry spans the realms of jazz and rock. As a bandleader and as a musician, Cindy is a sound innovator with a passion for pushing creative boundaries and exploring movement and change. She is as known for the nuances and colors she brings to her beats and fills as she is for the sheer power of her soulful playing.

Cindy remembers first asking for drums when she was three years old-"My mom says I was born hitting things and making rhythms," she says. She graduated from a toy drum kit at age 7 to her first professional set at age 13, and went on to play in the jazz band, concert band, and orchestra in high school. Cindy was living in New York just a few years later, and took advantage of the abundant opportunities to see legendary drummers perform live, including Art Blakey, Max Roach, Roy Haynes, Philly Joe Jones, Jimmy Cobb, Elvin Jones, Tony Williams, Jack Dejonette, and Al Foster among them. Outside of the jazz realm, other greats she admires include Clyde Stubblefield (James Brown), John Bonham (Led Zeppelin), and Mitch Mitchell (Jimi Hendrix).

Cindy has been creating magnificent musical time and space since the beginning of her career as a busking street performer in New York City in the '80s through the present day, touring the globe and making albums at the top of her game-including the critically acclaimed Another Lifetime (2010). In addition to collaborating onstage and in-studio with her own group-also known as Another Lifetime-she has toured and recorded with artists including Pharoah Sanders, Cassandra Wilson, Bill Laswell, Joss Stone, Joe Henderson, Buckethead, Don Pullen, Hugh Masakela, and Angela Bofill. From 1992 to 2007 and again in 2014 & 2015 she was the drummer in Lenny Kravitz's band, performing through multiple world tours and hit albums. In 2010, she was part of the all-star line-up performing "Bitches Brew," a tribute to Miles Davis' seminal album staged at the San Francisco Jazz Festival and NYC Winter JazzFest.

More recently, Cindy has become the regular touring drummer for Santana. Having met several years earlier at a festival in Europe while she was touring with Kravitz, Cindy first played with Santana in spring 2010, when drummer Dennis Chambers had a previous commitment. "They have a great band vibe. It's nice to play with people who have grown together, built a sound together, and stayed together," she says. "When that happens, you can create so many different levels of communication. That's what they've done, and I love interacting with it."

Electricity onstage generated chemistry offstage-Carlos proposed to Cindy during a July 2010 concert, and they married in December. Looking ahead, they will collaborate artistically as well, on projects that will no doubt reflect their shared passion for improvisation, and belief in the transcendent nature of music

On her own, Cindy is continuing to develop the heady jazz-rock fusion that she drives so powerfully on 2010's Another Lifetime. The tour de force album is a tribute to her mentor, the legendary drummer Tony Williams, and features reimagining's of eight songs from his seminal '70s group Lifetime, as well as three original tracks by Cindy. In its review, All About Jazz wrote, "Blackman's sonic explorations take jazz-rock beyond where the late drummer envisioned it when he was putting heads to bed with guitarist John McLaughlin, bassist Jack Bruce and organist Larry Young? Jazz-rock as performed by Williams, and now Blackman, is very much alive and well.

Her recording career began in the late '80s, and she has released albums with an acoustic ensemble-the Cindy Blackman Quartet-as well as with her electric outfit. One she cites as among her favorites is 2000's Works On Canvas. "I like where the band was at that point, our sound was becoming really cohesive," she says. The review in Jazz Times noted that the album "proceeds like an impressionistic suite in which she not only functions as the main rhythmic engine of the music, but also a magnificent colorist?Works on Canvas is an amazing portrait of one of this generation's most colorful drummers."

Cindy is currently featured on the Santana/Isley Brothers release Power of Peace, featuring the song "I Remember" which she wrote and sings. In 2016, she connected with fellow drummer and world-class producer Narada Michael Walden (Whitney Houston, Mariah Carey, Aretha Franklin) and together the two have been working on new material. Cindy Blackman Santana will release the new single titled "Fun Party Splash" on Narada Michael Walden's Tarpan Records in the summer of 2017, and continues to build a body of work and artistic legacy that make her one of the finest drummers, and recording artists of this or any generation.