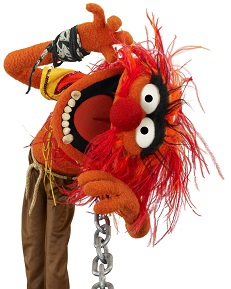 Frank Oz has stated that Animal's character can be summed up in five words: sex, sleep, food, drums, and pain. However, Animal has retorted: "Drums are food!" Animal's vocabulary is generally limited to guttural shouts and monosyllabic grunts, often repeating a few simple phrases, as well as his trademark gravelly laugh. During performances, Animal is usually chained to the drum set by a collar around his neck, as his musical outbursts are extremely violent. In some episodes, he has been summoned to chase off performers who are 'being annoying'.

Animal's bushy eyebrows and hair, outrageous behavior, and wild drumming has sometimes been compared to several classical hard-partying rock drummers, such as The Who's Keith Moon, Led Zeppelin's John Bonham, and Cream's Ginger Baker. Animal is a savant, versatile session drummer, to back Muppet tunes, capable even of finishing a slow song, if the singer is a nice lady. He can match both Buddy Rich and Harry Belafonte in drum-offs on The Muppet Show, Questlove on Late Night with Jimmy Fallon in 2011, and Dave Grohl on The Muppets in 2015. He shows a talent for jazz in a television advert for the Renault Clio car with French footballer Thierry Henry.

Animal has also run afoul of Muppet Show guests. In 1981, the aforementioned scene with Buddy Rich ends with the seasoned pro learning Animal's gonzo style, and performing it with twice the speed and proficiency. Animal throws a drum onto the irascible entertainer's head. When he repeatedly interrupted Rita Moreno's rendition of Fever with loud drumming outbursts, she became annoyed and slammed his head between a pair of cymbals (to which Animal responded by saying "Uh, that's my kinda woman!", before passing out).

A common gag involves someone imparting a figure of speech to Animal: Animal turns to the audience, his eyes go wide and he goes berserk, taking the figure of speech literally. For example, Jim Nabors once spoke the traditional theatrical good luck wish, "Break a leg", whereupon Animal indulged him by trying to break Nabors's leg. Another gag would occasionally occur when the band plays a slow song: Animal will get about halfway through and then after announcing "Too slow!" launch into a faster paced version of the song. The band would usually comment that Animal lasted much longer than they thought he would.

Animal's lack of social grace is on display at the very end of The Muppet Movie. After the credits, his face fills the screen as he admonishes the audience: "Go home! Go home!"