Mr. Abarry was previously the Special Representative of the Chairperson of the African Union Commission and head of office in the Democratic Republic of the Congo since 2014. Before joining that regional bloc, he headed its Liaison Office to the Economic Community for West African States (ECOWAS) in Abuja, Nigeria, beginning in 2011.

A career diplomat, Mr. Abarry was Ambassador to Belgium from 2003 to 2011, accredited concurrently to Greece, Luxembourg and the Netherlands. He also had accreditation to the United Nations Offices in Geneva and Vienna, the European Union Commission and the African, Caribbean and Pacific Group of States.

Mr. Abarry was also Diplomatic Adviser to the President of the Republic of Niger and Director General of State Protocol from 1999 to 2003. He served as a Counsellor at Niger's Permanent Mission in New York from 1992 to 1997. 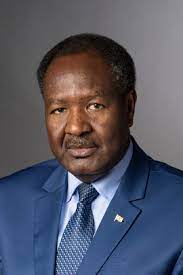