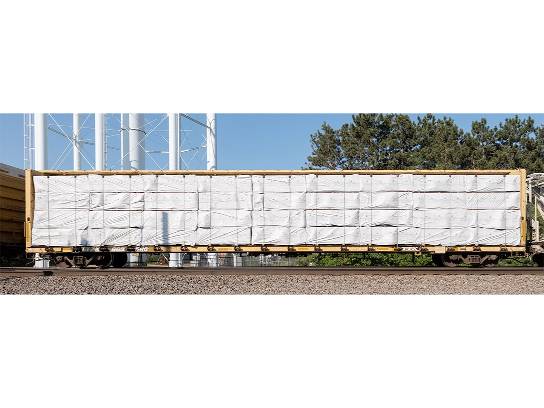 Passing Freight is a visual celebration of the unique beauty and function of freight train cars in the United States. In 2018 there were 1,637,000 freight cars in operation across North America, each distinctive in their construction, markings and utility. Time and human contact add to each train car's individuality: all carrying a vast, and sometimes surprising array of goods and resources. This series of photographs captures the still active rail lines that carry freight to destinations across the country. Mallon's industrial landscape photographs isolate freight cars within this iconic transportation system, which has played a critical role in supply infrastructure across the continent for hundreds of years.

Like the electrical synapses firing in the human brain, unseen and invisible, but essential to our ability to function, 140,000 miles of train tracks traverse America. Countless loads of steel, grain, coal and everything in between travel supported by this ancient network of distribution. Mallon has been finding locations from New York to California, patiently waiting for the combination of light, subject and environment to capture unique images where they intersect. He has chosen the "decisive moment" to capture these speeding boxcars photographically. There is an intersection of mechanical and natural worlds, singular encounters where the trains activate the landscape, which for Mallon are fleeting and hard to predict. Patience leads to the essential moment when these elements come into position: the points in time where the colors and shapes of each railcar, all of the nuances of the light reflecting from the loads of steel, wood, and everything else are composed and captured.

Stephen Mallon is a photographer and filmmaker who specializes in the industrial-scale creations of mankind at unusual moments of their life cycles. Mallon's work blurs the line between documentary and fine art, revealing the industrial landscape to be
unnatural, desolate and functional yet simultaneously also human, surprising and inspiring. His work has been featured in publications and by broadcasters including The New York Times, National Geographic, NBC, The Wall Street Journal, The Daily Mail, MSNBC, The Atlantic, GQ, CBS, the London Times and Vanity

In 2009, Mallon produced Brace for Impact: The Salvage of Flight 1549, a series of photographs recorded the salvaging of the passenger aircraft which captain Chesley "Sully" Sullenberger landed on the Hudson
River. In 2010, his solo exhibition Next Stop Atlantic documented the disposal of New York subway trains at sea to form artificial coral reefs. Over 60,000 people experienced the exhibition and was featured by Gothamist, Artnet, Yahoo, Fox News, and numerous other outlets.

Machines Of Interest, a curated selection of Mallon's work was on display at the National Museum of Industrial History for over nine months and is now at the Johnstown Area Heritage Association until spring of 2022. Mallon served as a board member of the New York chapter of the American Society of Media Photographers from 2002 until 2020 and served as president from 2006 to 2009. He is represented by Front Room Gallery in New York.