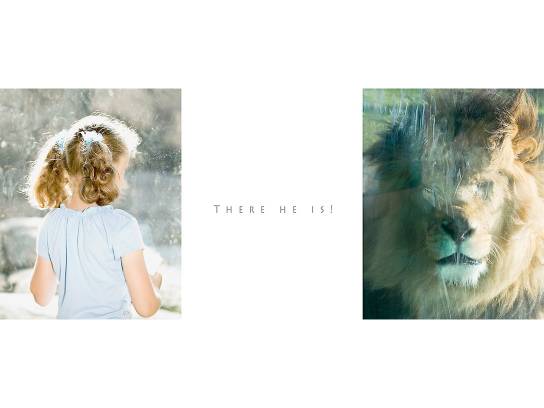 Animal Friends (2006-2007) is a series of photographs Suzuki shot at urban zoos. Each
piece is a triptych: a child, an animal, and text. Children's attribution of internal states to
non-human others such as animals and nature involves imagining others' minds and
internal states. Suzuki wanted to indicate this moment of non-verbal communication between child and animal by producing a likewise non-verbal commemoration. Nonhuman-animals present emotional expression and cognitive processing in ways
both similar to humans. The photos alone portrayed a tranquil, silent ideal, which was not the whole story. The visual record erases, in a sense, the obvious presence of adults, parents, or caretakers in the mise en scčne. During the intervals she spent photographing and videotaping at the zoo, I frequently overheard adults talking and maneuvering themselves and the children to a specific position or exhibit. According to The Child Study Association of America, "Adults misrepresent or misinterpret that beautiful of stillness of children when vivid impressions are being organized into happy memories or creative responses. They misinterpret this stillness, thinking that nothing has registered." The non-human creatures connect directly, often meeting the intense stare of both the children and her lens, but their communication remains non-verbal: unlike the children, they will never move into the realm of human language. Suzuki's straightforward stare, however, is not so straightforward - she uses the lens as a device to re-imagine her own childhood and invoke a remembered ability to understand wordlessly.

Miho Suzuki is originally from Japan, came to the US with a scholarship. Suzuki studied film and media arts and received her MFA in Photography and Related Media from the School of Visual Arts. Her photographs, video, and installations have been exhibited in galleries and museums throughout the United States and Europe. Her photography series Animal Friends is currently exhibited at SUMA, The Southern Utah Museum of Art, in the exhibition,This Earth. Miho Suzuki's artistic obsession with the camera started very young. She broke her aunt's SLR camera lens at age eight. At eleven Suzuki was so eager to photograph her dog and cats that she compiled photo books for them. Suzuki currently lives and works in Brooklyn.

Suzuki has collaborated with Open Source Gallery on multiple occasions, including for her solo exhibition, Our Children Today (2013).

Suzuki is participating in Selects-@-CREATE, an exhibition curated by Daniel Aycock and Kathleen Vance. This exhibit is presented by Open Source Gallery in collaboration with CREATE. Selects-@-CREATE opens on November 20, 2021 and is on view in Catskill, NY through January 16, 2022.