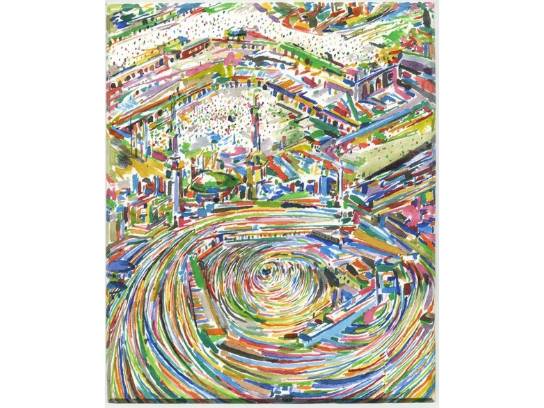 This piece is a painting of Mecca.

James Sheehan was born in San Francisco and raised in the Bay Area, Northern California suburbs pre-Silicon Valley era. He received his BA in Art History/Fine Arts from the University of California and his MFA from Temple University Tyler School of Art. Sheehan has presented solo exhibitions at the Art Center Gallery (NY, NY), The Drawing Center (NY, NY), and Galerie Schedler (Zurich, Switzerland) among others. His work has also been included in numerous group exhibitions around the globe. He has participated in residencies and received awards such as the New York Foundation of the Arts, ARCUS Residency, LMCC World Trade Center Residency, Pollock-Krasner Foundation, and the Marie Walsh Sharpe Foundation.