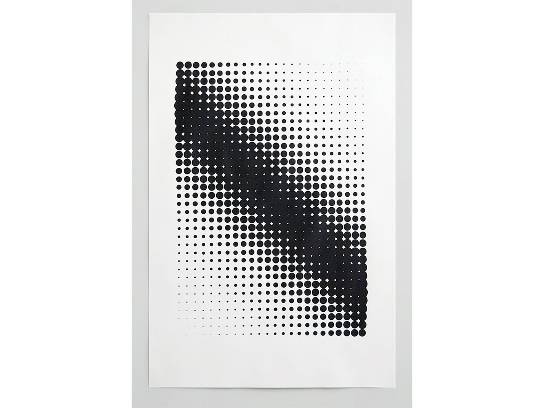 This piece is part of a large series of silkscreen prints (all unique copies) made since 2010, all based on appropriated images from graphic design from the 60-70s'. This series is generally exhibited in large groups without frames.

Felipe Mujica (Santiago, Chile, 1974) studied art at the Universidad Católica de Chile. Just out of art school, in 1997, he co-founds with Diego Fernández and José Luis Villablanca the artist-run space Galería Chilena (GCH), which operated between 1999 and 2005, first as a nomadic and commercial art gallery and later as a collaborative art project, a curatorial "experiment". In early 2000 Mujica moved to New York City where he currently lives. Parallel and interrelated to his own work Mujica has organized and produced many collaborative projects, which include mostly exhibitions and the editing, design and publishing of books. Produced low budget and with handmade quality, the books are distributed by hand and they inhabit a zone between artist book and catalog. They intend to be tools of exchange, sharing of information, of Mujica's work, as well as collaborative projects with other artists and finally also as research projects of historical figures.
Mujica has had solo shows at Sindicato, Las Terrenas, República Dominicana, Museo de Arte Moderno de Medellín, Galería Gabriela Mistral, Santiago de Chile, Casa Triângulo, Săo Paulo, Galerie von Bartha, Basel/S-chanf, Museo Experimental El Eco, México D.F., Proyectos Ultravioleta, Ciudad de Guatemala (2 person), Galerie Christinger De Mayo, Zürich, Die Ecke Arte Contemporáneo, Santiago and Centro Cultural Matucana 100, Santiago (2 person). He is currently preparing his fist US institutional exhibition which will open July 2021 at the Pérez Art Museum in Miami, Florida.