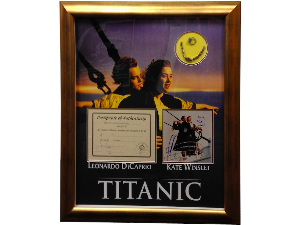 Screen worn jewelry from one of the most famous movies ever created, Titanic, along with an autographed photo on the ship's helm by Leonardo DiCaprio and Kate Winslet. Generously Provided By: Antiquities International. Fair Market Value: $2,495