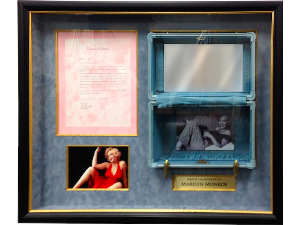 This very unique make up case was found in Marilyn Monroe's house after she died and given through her estate to one of her dear friends. Her personal turquoise Samsonite make up case comes with letter of provenance in a display case with images of the great star. Generously Provided By: Antiquities International. Fair Market Value: $3,995