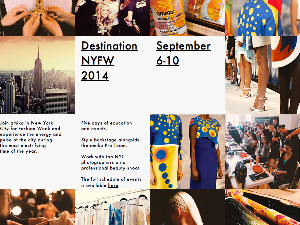 A trip to New York City during Fashion Week for an annual event that Amika hosts for stylists and distributors from around the world. For one person, includes: September 6-10, 2014 round trip flight, hotel, access to runway show, photo shoot and editoral classes. Generously Donated By: Amika. Fair Market Value: $3,600