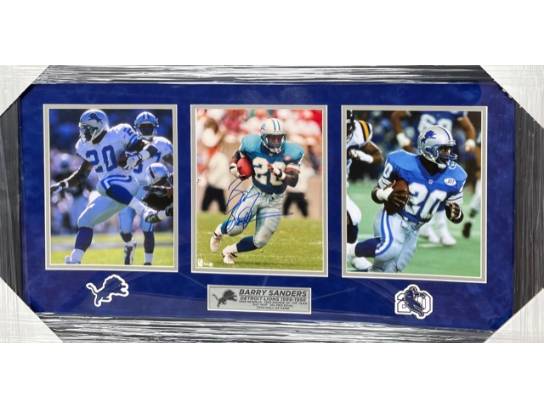 Here is an Autographed and Display featuring lions great and Hall of Famer Barry Sanders. South Sanders is widely considered the greatest Detroit Lions of all time.

When he retired from football he was the second leading rusher of all time. Sanders accomplishments and include Heisman Trophy winner has the greatest player in college football rookie of the year his first year with the lions and he also played in 10 pro ball games. He was elected to the pro football Hall of Fame his first year of eligibility in 2004 this triple display of sanders features the signed photo in the center along with two action photos.

This display is framed with graphics as well as blue suede matting comes with a letter of authenticity and measures 18 x 36".