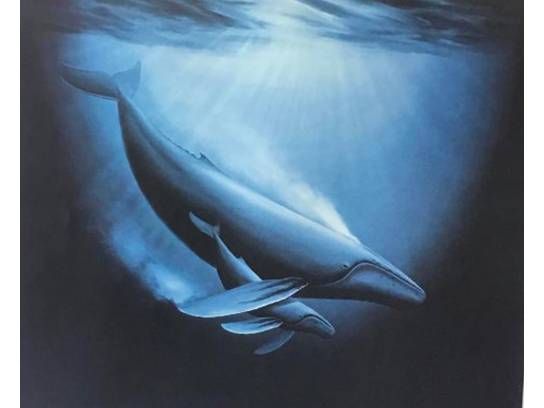 Celebration of the Sea. Printed in 1989 and numbered 25/65. Hand signed and numbered by the artist. Includes Certificate of Authenticity.

Internationally renowned marine life artist Wyland is one of the most celebrated and recognized artists of our time. An innovative painter, sculpture, writer, photographer, philanthropist, and filmmaker, he captured the imagination of people everywhere by completing over one hundred monumental marine life murals around the world from 1981-2008. The project, known as the Whaling Walls, remains one of the largest public arts projects in history and continues to be seen by an estimated one billion people each year..

Captain Dave's Whale Watching, home of the world's only Underwater Viewing Pods is passionately owned and operated by the husband and wife team, Captain Dave Anderson ("Captain Dave"), who is Coast Guard licensed, and his wife Gisele (Mrs. Captain Dave). For over twenty years, they have been taking people sailing to enjoy the company of some of the most magnificent marine mammals on the planet. Whether guiding families on one of their tours, hosting private parties, educating school groups, or entertaining celebrities, they've had the pleasure of introducing thousands of people from all around the world to the wonders of Dana Point-the Dolphin and Whale Watching Capital of the World .