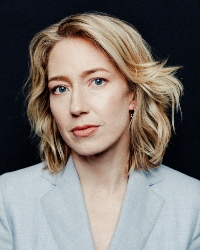 Carrie Coon joined the Steppenwolf Theatre Company ensemble in 2019 and was last seen at Steppenwolf in ensemble member Tracy Letts's Bug, for which she won a Jeff Award. Other Steppenwolf credits include Mary Page Marlowe, Tracy Letts's adaptation of Three Sisters, The March and Edward Albee's Who's Afraid of Virginia Woolf? as "Honey," a role that led to a Tony nomination and a Theatre World Award. She won a Critics' Choice Television Award for her performance in HBO's The Leftovers and a TCA Award for Individual Achievement in Drama for her performances in HBO's The Leftovers and FX's Fargo. For her performance in Amy Herzog's world premiere Mary Jane, she garnered a 2018 Lucille Lortel Award, an Obie Award and a Drama Desk Award nomination. Recent films include The Nest with Jude Law, Ghostbusters: Afterlife and upcoming historical drama TV series The Gilded Age by Julian Fellows.