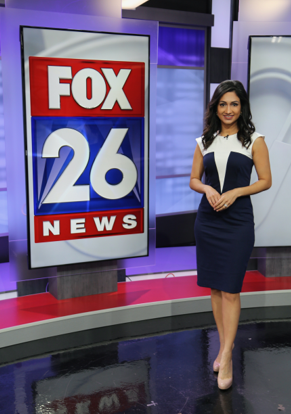 Before joining FOX, she worked at the CBS affiliate in Bryan/College Station, where she served as the weekend anchor and reporter for two years. She was also a reporter for KRIS and KZTV in Corpus Christi and KXII in Sherman, Texas.

Rashi is a graduate of Texas Christian University. She has worked for CBS Evening News in New York as a chosen International Radio and Television Society (IRTS) 2007 Summer Fellow. Right before moving to New York City, Rashi was overseas where she interned at the CBS London Bureau.

She has emceed and supports numerous benefits and fundraisers including the Indo American Charity Foundation, the American Heart Association, Indo American Chamber of Commerce, and India House to name a few.

Her husband, Daniel Gotera, is also a reporter/anchor in the Houston television market. They love spending time with their two little children.