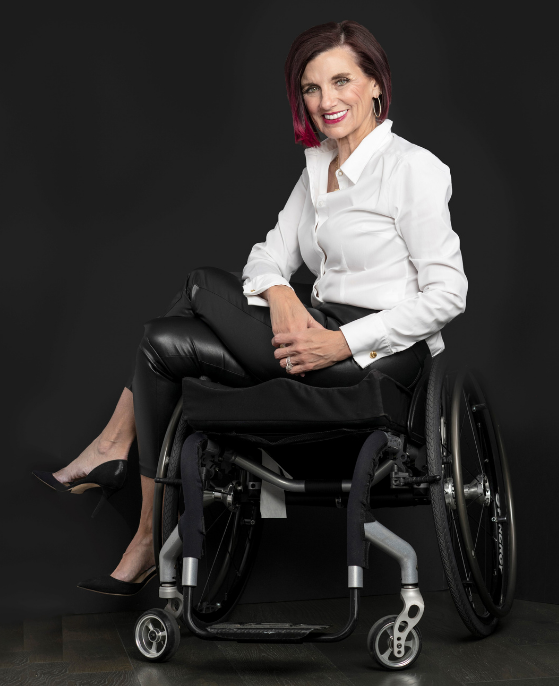 Lisa Sailor's journey with MS started when she was 28 years old causing her to start needing a wheelchair five years later. At first, she felt like her life as she knew it was over and she felt her identity was lost. It took several years to realize she could still be a useful member of society even with a disability. She now considers herself an MS warrior in a wimpy body fighting crime from the thief called Multiple Sclerosis.

In the early years of her disability, she took up the fight for accessibility in public places for all people regardless of their mobility needs. In 2007, Lisa switched her focus to volunteering for the MS Society after her husband Mike rode in his first TX MS150. Since then, Lisa has become an MS Ambassador and enjoys speaking around the country about her journey with MS.

She served five years on the Houston MS Leadership Counsel which led to being appointed in 2017 to the MS South Central Board of Trustees and still serves today. She and Mike have been Top Fundraisers for the past 14 years and have raised hundreds of thousands of dollars for MS.

Lisa has been instrumental in developing a Wellness Program called "Moving Stronger" for those with MS. She helped to form a partnership with the MS Society, the YMCA of Houston, and UT Health Science Center. She has worked many years to see that those with MS have access to Wellness in their own community.

Lisa is passionate about seeing that legislation is passed regarding fair and equitable healthcare for those with MS. She has lobbied as an advocate for MS at the Capital in Austin, TX and on Capitol Hill in Washington DC. She is working on getting a bill penned that would address the special needs of the disabled community during a natural disaster.

When Hurricane Harvey hit Houston in August of 2017, Lisa and Mike were some of the first volunteers to open the doors at the George R. Brown Convention Center shelter where she tirelessly worked for weeks focusing on displaced moms with young children. Lisa ultimately adopted 27 families from the shelter and raised over $250,000 to provide for desperately needed items. She now considers these once strangers her family and continues to be involved in their lives. Lisa was named a "Hero of Houston" for her disaster work.

In addition to her work for the MS Society, Lisa mentored women and taught life skills at the Harris County Jail for several years. She also serves on the film selection committee for ReelAbilities Houston.

Lisa says "I am MS, but I am also a woman, wife, mother, Lala (grandma,) friend, daughter, sister, an advocate, fundraiser, neighbor and a member of my community. I know my identity now and MS is just a small part of me".

Lisa is originally from Louisville, Kentucky and is married to her high school sweetheart, Mike. They have three grown children and two adorable granddaughters. The two have lived in Houston for the past 29 years. She enjoys crime shows, charcuterie boards and ice cream, preferably all at the same time.