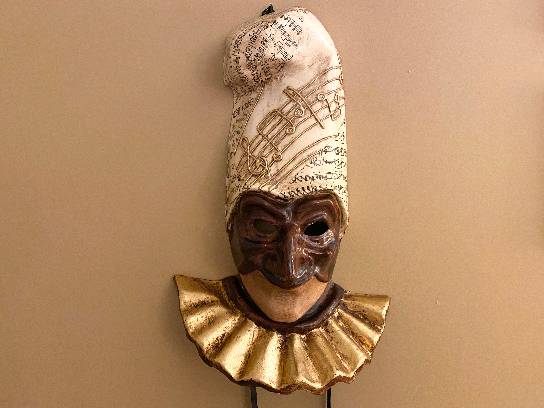 The tradition of the mask started in the 13th century when Venetians would hold celebrations and parties from December 26th until the start of Lent and wear elaborate masks to conceal their identity. These parties were the only time when the lower and upper classes mingled together. Aristocrats and peasants, disguised by their masks, played out their fantasies together. They indulged in illicit activities like gambling, clandestine affairs, political assassination, and dancing and partying the night away. There are several mask styles that are distinctly Venetian.

Pulcinella is considered the most popular and ancient mask, emblematic of Naples and its people, including all their contradictions. The mask has ancient origins, dating back to the theatre of the ancient Rome, and is still present in contemporary Venice Carnival celebrations. This hand-made Venetian paper mache mask is classic Pulcinella, with its dark brown mask, to imply weathering from the sun and prominent long and curved nose, hooking over the mouth, to resemble a bird's beak - with a signature wart that keeps it true to style. The furrowed eyebrows and deep wrinkles are also important and must be prominent enough to match the exaggerated style of commedia dell'arte masks. The adorning phrygian cap tells us that this was most likely modeled after the 17th century fashion. This interesting nod to antiquity is a indeed rare find!