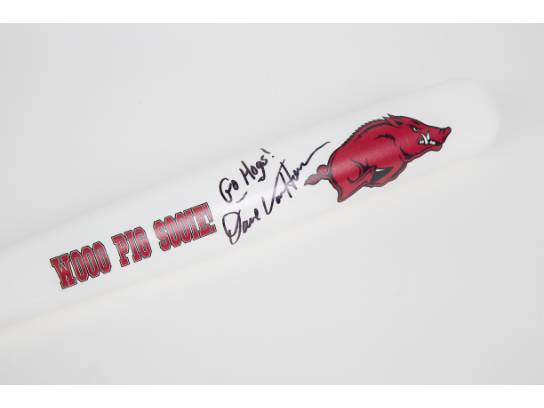 One of a kind, wooden baseball bat, signed by Dave Van Horn, coach of the Arkansas Razorbacks Baseball team.

After 18 years as head coach of the Razorback Baseball program, Dave Van Horn has continued to elevate Arkansas into one of the nation's premier teams year in and year out. Over his 18 seasons as head Hog, Van Horn has led Arkansas to six College World Series appearances, 16 NCAA Tournament berths, one Southeastern Conference overall title, five SEC Western Division championships and a total of 700 wins, averaging more than 40 wins a season, before the shortened 2020 campaign.

Ever since returning to his alma mater in 2003 to take over for retiring SEC legend Norm DeBriyn, Van Horn has continued to successfully field nationally competitive teams, while also grooming numerous All-Americans, all-conference and future Major League players.

Under his guidance, 28 Razorbacks have been named All-Americans, 42 as All-SEC players, and 109 have been picked in the MLB Draft. Those draft picks are the third-most among all active head coaches in the SEC.

Van Horn is the second-winningest coach in Arkansas history with 700 wins entering the 2021 season. In 2018, with a win at San Diego State, Van Horn became only the second active head coach in the SEC with 600 or more wins at their current school. In the last game of the 2020 season, Van Horn's club picked up victory No. 700 for the skipper.

Buyer to pickup at Arkansas Children's Foundation in Little Rock during pickup hours, or pay shipping.