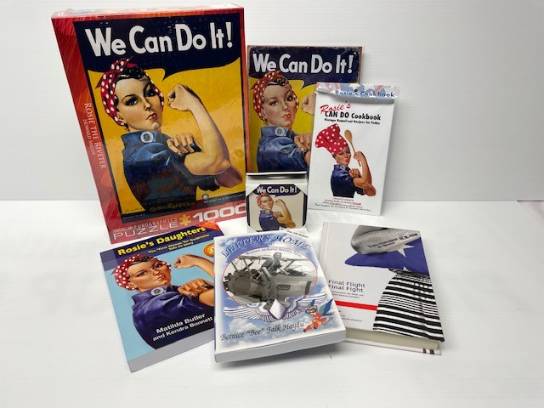 We can do it! Needed by their nation, women played vital roles in WWII efforts. Women Air Force Service Pilots (WASP) flew the range of aircraft in the USAAF arsenal, ferrying airplanes and serving in a variety of aviation roles to free up the men needed to fly in combat. In the included book Final Flight Final Fight, author Erin Miller details her journey on Capitol Hill to have her grandmother, WASP Elaine Harmon, laid to rest at Arlington. The book is signed by Erin, as well as by WASP Bee Haydu, WASP Kay Hillbrandt, and Tuskegee Airman George Hardy. In a second signed book, Letters Home," WASP Bee Haydu includes excerpts of her letters written during her WASP service. We're not done celebrating the glass-ceiling-shattering women of WWII. Also, take home this collection of one of the most enduring images out of the American home front during the war - Rosie the Riveter. Included in the collection is a puzzle, coaster set, a metal sign, and cookbook all bearing the iconic "We Can Do It" motto and the iconic image of Rosie the Riveter herself.