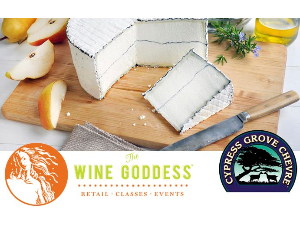 Wine Class for Two at the Wine Goddess! Contact the store to book the class.

One Humboldt Fog 5 lb. cheese wheel from Cypress Grove Chevre. Includes overnight shipping to anywhere in the Continental United States. Winner must return a signed copy of the certificate along with complete shipping address and preferred ship date.