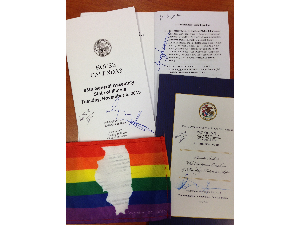 Cherish winning the Freedom to Marry in Illinois with this collection of signed memorabilia. Mini flag and program from the bill signing event, and House calendars from the day the bill passed, signed by Governor Pat Quinn, Senate sponsor Sen. Heather Steans, and House sponsor Rep. Greg Harris.